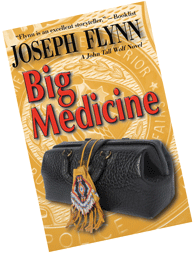 The President wants Tall Wolf to join her cabinet.

Jean Morrissey, the new President of the United States wants John Tall Wolf to join her Cabinet and become the next Secretary of the Interior. John wants nothing to do with that job. Further complicating matters, Marlene Flower Moon, John’s nemesis, has disappeared, and John can’t help but wonder what devilry she might be plotting. On top of that, John’s great-grandfather, Alan White River, the mastermind of the Super Chief theft, has been released from prison early, his behavior to be supervised for two years by John.

Happily, though, White River brings someone with him who has a problem for John to solve. Dr. Yvette Lisle, a medical researcher and a member of the Omaha Indian tribe, just might have solved the problem of overcoming drug-resistant bacteria, only her laptop computer with all her data on it has been stolen from her laboratory. That’s the bad news. The good news is finding the computer gives John a perfect excuse for stalling the President.

Except … finding the computer might be a lot more dangerous than John thinks, and the President gives him just three days to crack the case before she turns it over to the FBI.

“I am a member of Joe Flynn’s Advance Readers’ Team. I enjoyed the book so much that I bought a copy of it for a second reading at a future date.” — Joseph J. Sebek, amazon.com

“This is the best John Tall Wolf Novel … I especially like the John Tall Wolf novels because of the crisp characters and the pace of the action.” — Rusty Barnet, amazon.com

“This book hooked me from the very beginning. The characters for interesting and believable. The story moves along at a good pace…” — Sharon, amazon.com