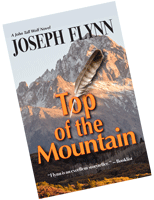 John Tall Wolf is on a mission.

John finds out that even death can’t stop his great-great-grandmother, Awinita, from nagging him. In a dream, she tells him to build a monument to her husband, John’s late great-great-grandfather, Alan White River, the man who stole the Super Chief locomotive. Awinitia wants the monument to be big. Specifically, she wants John to purchase a mountain and commission a 100-foot tall statue of Alan.

Once word of that idea leaks out, it catches on like wildfire among the super-rich and egotistical of the country. Billionaires of all sorts decide they want to buy their own mountains and be remembered as giants. One even decides he wants to be the only one to be so honored, and he’s willing to kill off the competition.

That leaves John facing a tremendous challenge. Fortunately for him, Marlene, a/k/a Coyote, and a number of old friends join forces with him in a fight to the finish.