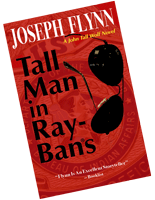 Out for a day’s adventure exploring the dry bed of Lake Travis in Austin, Texas, two young boys stumble upon a skeleton. It might be all that remains of a fugitive named Randy Bear Heart. Wanted for robbing three banks and killing three cops, Bear Heart was never brought to justice.

The FBI is called on to determine how the outlaw avoided arrest for twenty-five years and who put him in the lake wearing chains. The BIA — Bureau of Indian Affairs — gets the very same job. Special Agent John Tall Wolf is put on the case because one of the dead cops was a Native American who worked at the Mercy Ridge Reservation.

The FBI wants John to coordinate all his efforts through SAC Gilbert Melvin. John is having none of that, saying, “I’ll conduct my investigation as I see fit.” He doesn’t even get along with his own boss, Marlene Flower Moon, head of the BIA’s Office of Justice Services.

While interviewing John for his job, Marlene was amused by his assertiveness, and asked him, “What do you want, a license to take scalps?” John said, “Yeah, that’d be good.”

“Being a devoted fan to prolific and gifted author Joseph Flynn..I was very excited to get the first book in his new series, Tall Man in Ray-Bans, and see where his amazing talent would lead me this time. I was not disappointed…..I couldn’t put the book down.” — Cynseer Booklover, amazon.com

“Wonderful start to a series. What an interesting novel for the first in a series! John Tall Wolf is a mesmerizing character.” — Gary J. George, amazon.com

“If the howl of a coyote at night keeps you awake and watchful..as it should…Then the lack of sleep as you read this should be no surprise.” — Cindy, amazon.com