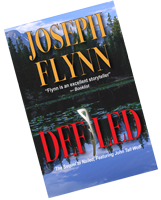 Monday morning doesn’t start well for Ron Ketchum, chief of police of the Sierra Nevada resort town of Goldstrike, California. His deputy chief leaves town looking for a new job. A “dirty” bomb — C4 plastic explosive attached to a container of radioactive material — is found on Lake Adeline, the town’s crown jewel. Hale Tibbot, a rich, divisive real estate developer, is murdered and drained of half his blood.

Even for a cop with twenty years LAPD experience, that’s a handful. Ron reaches out to his old partner, Keely Powell for help. Then the feds arrive. First, it’s Special Agent John Tall Wolf of the BIA, Bureau of Indian Affairs. Next, to stir the pot further, the FBI sends in Special Agent Abra Benjamin, who tells Ron her goal is to “eat Tall Wolf’s lunch.”

Tracking down a terrorist, finding a killer and keeping everyone’s lines of responsibility straight would be challenge enough for any cop, but Ron has other worries, too. While sorting out the list of possible suspects for Tibbot’s murder, the chief realizes he has to include Goldstrike’s mayor and movie icon, Clay Steadman, and his own father, Walter Ketchum.

This thriller had a good story, but it’s his intertwining of memorable, if not flawed characters that make you want to keep reading. Thank you Mr. Flynn. — Barb Nowlin, amazon.com

[Flynn’s] books are all fast-paced and current. Every one I read is my favorite until the next one. I recommend this and his others to those who enjoy a well-crafted, cop, thriller. — love2read, amazon.com