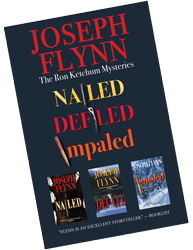 A trilogy of mysteries set in the High Sierra resort town of Goldstrike, California:

In Nailed, Police Chief Ron Ketchum has to catch the killer of an African-American preacher who’s been nailed to a tree. His investigation is complicated by the fact that Ketchum has testified in court that he’s a recovering bigot, and then there’s the mountain lion that’s marauding in the nearby forest.

In Defiled, Ketchum, with the help of BIA Agent John Tall Wolf, have to stop an eco-terrorist before he can despoil the town’s natural wonder, Lake Adeline, with nuclear waste.

In Impaled the town’s legendary former mayor and movie icon Clay Steadman is found dead with a wooden stake driven through his heart. Clay had already been at death’s door, but someone clearly didn’t want him to rise from his grave. Ketchum has to find out who.

Searching for killers, hunting a rogue mountain lion, stopping terrorists, dealing with earthquakes and avalanches — makes being a cop in L.A. seem like the good old days.