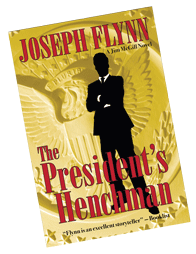 How did former Chicago cop Jim McGill become the first P.I. to live in the White House? He married Patricia Darden Grant the first woman to become a U.S. President … not long after he solved the murder of her first husband.

Winning an election was one thing. Finding work after moving to Washington was another. McGill decided to be his own boss and took out a private investigator’s license. That wasn’t a politically correct occupation, but then McGill refused to allow himself to be addressed as the First Gentleman.

He nicknamed himself The President’s Henchman.

McGill’s first case is to find out who is stalking a woman in the White House press corps. Then his wife asks him to be a shadow advisor to a young Air Force investigator looking into a he-said-she-said charge of adultery leveled against a female colonel working at the Pentagon. Both cases have the potential to become politically explosive.

“Awesome start to a fantastic series! This is the “original” Jim McGill and establishes the characters you come to know throughout the series.” — Sandy, amazon.com

“Thoroughly enjoyed this book. Plenty of suspense but also a playful tone throughout.” — Dorothy Williams, amazon.com