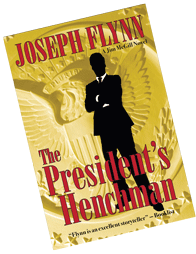 He responded, “I prefer to think of myself as the president’s henchman.”
The line got a good laugh from the newsies; even Press Secretary Aggie Wu grinned. But Chief of Staff Galia Mindel reacted to the remark with a mighty frown. McGill saw the look of disapproval but didn’t worry. He didn’t work for her.

And his concealed weapon permit.

She’d be about as thrilled as the Secret Service had been. They’d changed his code name from Valentine to Holmes. Which McGill had laughed at and, on the whole, considered an improvement.

Galia wasn’t likely to crack wise, though. She’d try to fight him. And lose.

McGill’s career choice came with a presidential stamp of approval.

“What exactly does the president’s henchman do?” Candy Crowley inquired.

“Things nobody else can,” McGill told her with a twinkle in his eye.

James Jackson McGill became a minor historical figure when his wife, Congresswoman Patricia Darden Grant (R-IL), became a major historical figure by becoming the first woman to be elected president of the United States. McGill had worked as the de facto head of security for Patti’s presidential campaign. Before that, he’d been a Chicago cop for twenty years, and the chief of police for five years in the posh North Shore suburb of Winnetka, Illinois.

It was in this latter capacity that McGill met the future president. He solved the murder of her first husband, philanthropist Andrew Hudson Grant. Cracked the case in twelve hours, which was why the president-elect couldn’t argue with McGill when he told her the week before her inauguration that he was going to have to find something to do while she was busy running the country. He wasn’t ready to go fishing or spend all his time cutting ribbons.

“But I know you don’t like any of the federal agencies. So, you don’t want me to appoint you to run, say, the FBI.”

“Do you want to stay in Illinois? Have a commuter relationship?”

“So what does that leave?”

Patricia Darden Grant was a very smart woman. She processed information like a supercomputer. But that one stopped her cold—long enough to make her laugh, anyway.

“You … you want to be the private eye who lives in the White House?”

McGill said, “Why not? You’re the only one who gets to break tradition?”

What could she say to that? Only: “You’ll be careful, Jim?”

“Sure,” McGill said. “Won’t do a thing to embarrass you.”

“I wasn’t talking about politics. I can always get another job. But I don’t want to bury another husband.”

McGill kissed the most powerful woman in the world, loving her more than ever, and did his best to reassure her he would be around for a long, long time.

McGill absolutely refused to have more than one Secret Service agent assigned to guard him. The head of the White House Security Detail was an unsmiling humanoid named Celsus Crogher. Although only in his late 40s, Crogher’s gray hair was turning white. His eyes were the color of silicon; his skin was slate. It was as if all pigment had been pruned from his family tree. Crogher wanted McGill’s protection to be closer to platoon strength. The president brokered a compromise: McGill would have one Secret Service bodyguard and an armed driver from the White House Transportation Agency.

McGill interviewed several men and women for each position. In the end, he picked Secret Service Special Agent Donald “Deke” Ky. The son of a Eurasian Vietnamese-American mother and an African-American GI father, Deke had tightly waved black hair, blue eyes behind an epicanthic fold and skin the color of a new penny. Leo Levy was a self-described good ol’ Jewish boy from North Carolina. Long and lanky with a face out of the Levant and an accent out of Andy Griffith, he’d driven the NASCAR circuit before getting into government work.

Both men had exemplary records and both took a solemn pledge never to rat out McGill for anything he said or did. Celsus Crogher and Galia Mindel were not to be privy to any of the doings of McGill Investigations, Inc. Beyond that, Deke and Leo were to let McGill know if they detected any government busybodies snooping on him.