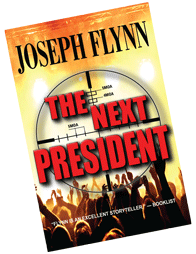 Upward of half-a-million people filled Chicago’s Grant Park chanting for the appearance of the man they believed would be the next president of the United States, blissfully unaware that the lectern at which he would speak was already targeted in the telescopic sight of an assassin.

For most purposes, the day was perfect. The sun shone from a cloudless sky, Lake Michigan glistened sapphire blue, and a breeze off the water moderated a temperature of 82 degrees. Streams of people continued to arrive on foot from all directions. Traffic on Michigan Avenue, Lake Shore Drive and all the east-west streets from Randolph to Jackson was at a standstill. Most motorists simply turned off their engines, stood outside their vehicles, and listened to the coverage of the event on their radios.

But no help was needed to hear the chant of the crowd. It rolled across the lakefront as if the city itself was calling out. Demanding the man who would make history.

The throng pleaded for the appearance of Senator Franklin Delano Rawley of Wisconsin, who was already an historic figure by virtue of becoming the first black man to be the presidential nominee of one of the two major political parties.

Presently at the lectern, the city’s mayor was doggedly doing his best to finish his speech. A ripple of laughter raced through the crowd as a gust of wind almost carried off the final page of the mayor’s oration. Sitting behind the mayor on the stage of the James C. Petrillo Music Shell were the candidate’s family, and an elite selection of local, national, and party dignitaries. They looked out at the immense, expectant gathering with undisguised joy.

The polls said their man was ahead of the incumbent by only five points, scarcely more than the margin of error, but many of the pundits said this was an election year that would be unlike any other. Two hundred and sixteen years after electing George Washington as its first president, the United States was electrified by the possibility that it might elect Franklin Delano Rawley as its first black president.”FDR, FD—”

The chant seemed to catch in everyone’s throat for a split second and then it changed to a roar as the candidate appeared.

Like rolling thunder, the multitude’s shout of approval reached the 15th floor room at the southwest corner of the Hyatt Regency Chicago. It was all the easier to hear because the small floor-level window panel to the left of the room’s heating and air-conditioning unit had been carefully removed. The rectangle of thick safety glass and the fat black rubberized seal that had held it in place lay nearby, ready for quick replacement.

J.D. Cade lay in a prone shooting position just back of the empty window frame in the shadows of the darkened room. He’d registered at the hotel the day before under the name of Jack Tenant with his hair colored silver-gray by a wash, brown contact lenses over his blue eyes, a well-groomed but newly grown beard, and two-inch lifts in his shoes. He’d checked out via the TV 15 minutes ago, but a Do Not Disturb sign hung on the outside of the safety-latched door to his room. Now, he watched through the scope of his McLellan M-100 sniper rifle, the barrel steadied by its tripod, as Senator Rawley arrived on the stage of the music shell some 2,950 yards away.

It had been almost 41 years since John F. Kennedy was killed by a sniper. The Secret Service hadn’t forgotten the lessons it learned from that tragedy, but in the manner of their counterparts at the Pentagon, they had prepared for the last war. The helicopters, the agents on rooftops, the entire security cordon were all positioned on the assumption that no current sniper rifle had an effective range beyond 2,000 yards.

The exception to this limit was the .50 caliber McLellan M-100 which was used by the Navy SEALs and had an effective range of 3,000 yards. The round it fired was powerful enough to shoot down a large aircraft, much less kill a man. But the special agents protecting Senator Rawley — Orpheus, by his Secret Service code name — operated under the assumption that this weapon was the exclusive, tightly guarded property of the military.

Nevertheless, J.D. Cade had one, and the hotel room he’d obtained was beyond the security cordon. A picket fence of high-rise buildings on Randolph Street stood between the Hyatt and the park, but he had a clear field of fire, between the Aon Center on the east and the Prudential Plaza Building on the west, to the northeast facing stage of the music shell.

Senator Rawley, known as Del on all but the most formal occasions, had just stepped onto that stage and was waving to the adoring crowd. He was already in J.D.’s crosshairs, but at the moment the flags on the stage showed that a swirling wind was blowing. Over a distance of almost 3,000 yards, a strong wind might move even a .50 caliber round far enough to kill someone walking along Michigan Avenue or sitting on a boat in the Monroe Street Harbor. J.D. had to be patient. When the wind died so would his target.

Del Rawley was not a classically handsome man, but even seen through the narrow field of vision of his scope, J.D. could recognize the intelligence in the man’s eyes and the star-power in his smile. Having studied his target, he knew that Rawley was a vet like himself, a former combat medic. He had earned his bachelor and master degrees from the University of Wisconsin, had been an educator and an author, had served in the House of Representatives and now the Senate, was a devoted husband, father and grandfa—

Given the intervention of Fate, that was long enough for the course of history to be changed.