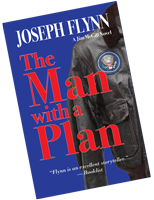 The young woman from the State Department made her way to Jim McGill’s office on short notice: five minutes. She’d called en route from her car. Arriving, she introduced herself to McGill and Sweetie — whom McGill had summoned — as Thea Sideris. She thanked both of them for seeing her without proper notice, took a seat, and got right down to business.

“Mr. McGill, the State Department has determined that China is targeting you.”

Addressing those instructions in order, Ms. Sideris replied to Sweetie, “By China, I mean the General Secretary of the Communist Party, the Chairman of the Central Military Commission, and the President of the People’s Republic of China: all three offices are held by Wang Yong.”

Turning to McGill, Ms. Sideris said, “By targeting, the State Department’s current analysis is the most powerful man in the most populous country in the world wants you dead, Mr. McGill. This is due, of course, to your foiling China’s plan to kidnap dozens of the western world’s finest young thinkers.”

Then McGill asked, “Do you know if they intend to kill me by any particular means, Ms. Sideris?”

This time, Sweetie got in the second question: “And, on whose timetable?”

The young member of the diplomatic corps could only shrug as her eyes began to tear up.

“I’m sorry. I don’t have the answers to those questions. I’m not even sure if anyone at State has that intelligence yet. I was just told to deliver the information, the accuracy of which we assess as being likely-to-certain. I felt horrible about … well, having to deliver the bad news. Then I was reminded that it was a part of my job. So here I am.”

Sweetie took the young woman’s near hand and gave it a light squeeze.

McGill thought Thea Sideris couldn’t be any older than his daughter Abbie.

Hell of a thing, the news she’d had to deliver.

He asked, “How were you given the chore of making this notification, Ms. Sideris?”

She sighed. “I earned it, unintentionally of course. I’m one of what our office calls the naturals, in terms of speaking another language I mean. My brother is fourteen years older than me. I was sort of an oops baby. Anyway, I was nine years old when Tom got married at twenty-three.

McGill nodded. “You know what, though? If it’s okay with your bosses and you feel up to it, I’d like to have you personally keep giving Margaret and me any further heads-ups as they come in. You know, assuming you hear something helpful. Say, like when and which way to duck.”

Ms. Sideris confessed, “I was also given this assignment because I happened to be close to your place of business when the call to me came through.”

McGill and Sweetie shared a glance. That new tidbit made both of them think McGill was genuinely in hot water, and it was about to come to a boil.

Recognizing their informant’s reluctance, McGill added, “You know what? I’ll just call President Morrissey, ask her if she can talk to your boss and have you keep us informed on this situation. That sound fair to you?”

Understanding now that she was dealing with people whose political reach far exceeded her own, Thea replied, “Sure, whatever the president says goes, right?”

Answering her own question, Thea bobbed her head and said, “Of course it does.”

Sweetie told McGill, “I’ll walk Thea out, Jim. Give her Patti’s number to call in case Jean is tied up with other important matters. That all right with you?”

McGill nodded, got to his feet, and shook Thea’s hand.

“Thank you for coming, Ms. Sideris. Forewarned is forearmed.”

Heading out the door with the young woman, Sweetie added, “Don’t worry about your boss, Thea. We’ll be polite, but we’ll square things with him or her, too. You, however, should keep a very low profile about talking with us. We wouldn’t want any hostile attention directed your way.”

Just the idea made the young woman’s jaw drop.

As soon as Sweetie and Thea departed, McGill called Patti at Committed Capital.

He used the numerical suffix that would put him straight through.

Regardless of whatever else had been occupying her time at that moment.

Having received any number of distressing calls during her eight years in the Oval Office, Patricia Grant McGill knew how to keep a measured tone of voice. Nonetheless, she came straight to the point: “Did something happen to one of our children, Jim?”

All three of McGill’s children had “adopted” Patti, calling her their other mother.

That question made McGill stop and think: Might a Chinese plot to kill him involve any or all of his children as bait?

“I hadn’t thought of that,” he said, “the kids being involved.”

“Yeah, it’s me. I’m a target. I just got the word from the State Department.”

“Yeah, them.” He gave Patti a quick summary of the visit by Ms. Sideris.

After a brief silence, Patti replied in a tone of voice that reminded McGill of when she had made speeches to the nation as president. Letting the country know there were daunting challenges ahead that the American people had to face. Of course, back then, she also had expert advisers and the armed forces to make things turn out right.

“Jim, this notification had to come down from the Secretary of State himself.”

“And he assigned a very young woman to deliver the news?”

Intuitively agreeing with the information McGill had been given, Patti told him, “She must have been handy. You said she called in advance of seeing you, but you didn’t have to wait long before she appeared, right?”

“So it was a matter of expediency to use her. Urgency as well.”

“The Secretary of State couldn’t have just called me directly?” McGill asked.

“Of course he could, but with information like this, he wasn’t about to assume that no foreign  power had found a way to hack into his official communications. My guess is he spoke person-to-person to someone at least halfway down the office totem pole. That second party, using a private phone, got in touch with the young woman you saw. She must have been outside of the State Department building to get to you so quickly, and, for all we know, she was also equipped with an off-the-books phone. She, in turn, passed the word to you in person.”

Just hearing Patti riff on all that state-craft made McGill feel more threatened than ever.

It also ticked him off but good. Somebody was going to come after him? Well, that SOB had better not —

Patti said, “Jim, I can imagine what you’re thinking, but what I’d like you to do now is meet me at the White House, ASAP.”

McGill had to push aside the notion taking shape in his mind. Some foreign hitman was going to come for him? Leave Patti a widow? Leave his children without a father? Well, that sonofabitch had better —

As if Patti could feel the heat building on McGill’s face, she told him, “This is not the time to be impulsive. That would —”

“Make things too easy for the bad guys,” McGill said, finishing Patti’s thought. “You’re right. I’ll calm down. Thank you. You’re sure Jean Morrissey isn’t, you know, out of town or even outside of the country?”

“She’s hard at work in the Oval Office.”

“You keep an eye on the president’s schedule?” McGill asked. “Or is The Washington Post publishing it these days?”

Patti laughed at that idea and said, “Edwina keeps in touch with Nan.”

Edwina Byington was Patti’s personal secretary and had moved with Patti from the Oval Office to Committed Capital. Nan Franklin served as President Morrissey’s gate-and-schedule keeper.

“I’ll alert the Secret Service that you’re on your way to the White House, okay?” Patti asked.

McGill sighed. “Sure. I’ll calm down and be sensible.”

He told Patti he loved her and said goodbye.

That was when he saw that Sweetie had reentered his office. She’d heard his promise about calmness and sensibility, knowing he had to be speaking to Patti. She gave McGill a thumbs-up and took a seat.

Sweetie told him, “I’ve already talked with Abbie and Ken. They’re taking this news seriously. Our local and Chicago offices are providing people to watch over the two of them. Your two oldest kids seem to be taking things better than you are, judging by all the blood in your face. By the way, you can call Caitie.”

McGill nodded and said, “If you were in my place …”

Sweetie smiled in a merciless way that had wrung more than one confession from wrongdoers. She told McGill, “If this were happening to me, I’d probably be singing ‘The Battle Hymn of the Republic,’ placing special emphasis on loosed the fateful lightning of my terrible swift sword.”

McGill grinned and nodded. “No quarter given, huh?”

Sweetie shook her head. “For something like this, none. Not when your life or those of your family are concerned.”

“Sounds like a plan, or the start of one anyway,” Sweetie said. “I’ll keep the lights on here.”

McGill knew Sweetie would also be working out defensive angles for all involved — some possibly not legal despite her adherence to the Ten Commandments. She closed the door to McGill’s office behind her while he put in a call to his youngest and most headstrong child.

Damnit, in that moment, Caitie reminded McGill of nobody more than himself.

Especially when he’d been as young as Caitie was now.