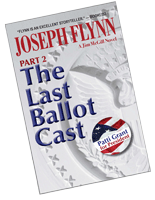 e Last Ballot Cast is a story so big [over 900 pages] it has to be told in two parts.

” I just this minute finished part 2 of”The Last Ballot Cast” … yea for Joe … I enjoyed part 1 of “The Last Ballot Cast”, and I sent Joe an email stating just that. I also told him that I expected and wanted part 2 to leave no unanswered questions or hanging situations. He did not disappoint me … what an ending!” — Andy S., amazon.com

“Read them all to this point. I especially like the continuation style in the last 3 or so. So impressed how timely the subjects are. I love the characters and their development.” — Marcia, amazon.com