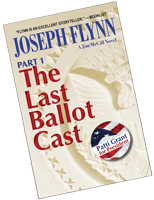 The Last Ballot Cast is a story so big [over 900 pages] it has to be told in two parts.

“An excellent read. A must read follow-on to the other President’s Henchman novels!” — Prof Heshie, amazon.com

“Most enjoyable, like all the characters and couldn’t wait for part 2. It’s a fun read with enough excitement to keep you reading.” — Beve, amazon.com

“The story is great and it’s hard to stop reading. You have to know what is going to happen next.” — Jessica Miser, amazon.com