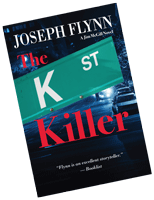 Somebody in Washington is updating Shakespeare. The first thing is to kill all the lobbyists. Knocking off three of them in consecutive weeks, the killer is off to a fast start. On the lapel of each victim, the killer leaves a pin that, arguably, resembles Porky Pig.

The Metro police are on the case when Putnam Shady steps forward and identifies the third victim as a friend. Authority averse, Putnam gives the cops only bare bones information — but he tells Margaret “Sweetie” Sweeney that he thinks he will be the next victim.

The reason, he explains, is quite simple. There are two plans afoot to seize control of the federal government. At the center of one plan is the speaker of the House of Representatives. The group behind the other plan consisted of Putnam and his three dead colleagues.

Sweetie vows to protect Putnam. She enlists Jim McGill, the president’s henchman, to find out who is behind the murders. But then McGill’s whole world is turned upside down. His son, Kenny, is diagnosed with leukemia.

President Patricia Grant’s life is only slightly less tumultuous. Her enemies force her to leave the Republican Party. Erna Godfrey implicates her husband in the killing of Patti’s first husband, Andrew Hudson Grant. But Reverend Godfrey refuses to go down without a fight.

Amidst the turmoil, Welborn Yates and Kira Fahey schedule their marriage — and inevitably have to deal with wedding crashers.

” I have truly enjoyed all three of the Jim McGill mysteries.” — Andy S., amazon.com

“Enjoyed it from the first page to the last.” — Lynne, amazon.com