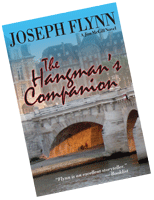 Jim McGill, the first private eye to live in the White House, refers to himself as The President’s Henchman. As the husband of President Patricia Darden Grant, he can pretty much call himself what he wants.

When Patti has to go to a G8 meeting in England, McGill is fitted for evening wear and drafted to be Patti’s escort at a gilded dinner. But instead of being a proper presidential spouse traveling abroad McGill gets a new case to work, across the Channel in Paris.

Glen Kinnard, a former Chicago cop McGill knows from his days on the CPD, took his late wife’s ashes home—and wound up killing the star of the French national soccer team under a bridge at the foot of the Eiffel Tower. Kinnard swears he was only defending a woman the Frenchman was beating…but the woman has disappeared.

In Paris, McGill encounters gypsy con artists, British soccer hooligans and a monstrous brute known as The Undertaker. Things are never easy. And he has to wrap up the case in time to get back to London for dinner with the President of the United States and the Queen of England.

“Joseph Flynn created an excellent follow-on to the President’s Henchman, which picked up after the first novel, and took me on another roller-coaster ride of pure enjoyment!” — Prof. Heshie, amazon.com

“The first book was great and the political wit continues!” — JKom, amazon.com

“I really enjoy this series and the characters in it. Look forward to reading the next book. Couldn’t put this one down.” — Andrew Sloan, amazon.com