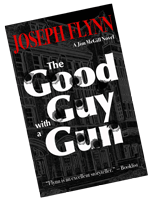 One Saturday, a new client comes to Jim McGill with a desperate plea. Zara Gilford says someone is planning to kill her husband soon. Jordan Gilford is already famous as a whistle-blower who exposed corruption at two major defense contractors. Now, he works for the Inspector General’s office at the Pentagon. Zara tells McGill someone wants to make sure Jordan doesn’t find thievery inside the Department of Defense.

That same morning, Abel Mays, a despondent public high school football coach who has lost two star players from his team to the recruiting efforts of the coach at the exclusive Winstead School in Georgetown, uses an assault weapon to gun down the players who deserted him, their new coaches and the teammates who try to help.

Then Mays is found shot dead in his SUV — after his weapon is used to kill one last victim, Jordan Gilford. For FirePower America lobbyist Auric Ludwig this is a dream come true: A good guy with a gun has killed a bad guy with a gun.

Zara Gilford isn’t buying that. She persuades McGill to find out who really killed her husband. McGill’s investigations threatens Ludwig’s narrative. But a political firestorm is just one of the problems McGill will face. The president asks her henchman to bring Jordan Gilford’s killer in alive, and that’s when things get really dangerous.

The Jim McGill Series:
Each book starts with a Character List. For readers who use Facebook and would like to connect with other readers who enjoy the McGill Series, we have set up a page called The Friends of Jim McGill. We hope you’ll join the conversation.

“Political murders and mayhem make this an intense political thriller. McGill continues to “think outside the box” with a lot of help from other powers. Great read!” — Marie P., amazon.com

“Totally love the Jim McGill books especially since I am so close to the Washington, DC area and grew up there. I do think the writing is very good and page turning action.” — Priscilla W. Mott, amazon.com