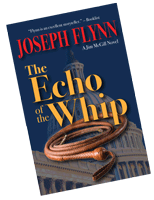 President Patricia Grant has been impeached. Her trial in the Senate and the fate of her presidency lie just around the corner. That leads James J. McGill to suggest publicly that he might break the noses of any number of Washington pols.

White House Chief of Staff Galia Mindel tells McGill he’s not being helpful. She sends him to work a case in Los Angeles. A friend of Galia’s has just had her frozen embryos stolen.

McGill knows he’ll need a fed to run interference for him with the LAPD. He teams up with BIA Co-director John Tall Wolf. Even out in La-La Land, though, McGill can’t escape Washington politics. The primary suspect in the theft has close connections to House leadership, the very people who initiated the impeachment charge.

Even worse, McGill learns of a threat against his life. Somebody doesn’t like him snooping around in SoCal. That guy wants to do more than bust McGill’s beak, he wants to punch his ticket.

“Joseph Flynn is a wonder of modern novel writers. For me, the best writers are those whose books feel as if the author is telling you the story right there. I have read the first eight of the Henchman books voraciously and have to force myself to read something different before the ninth one.” — Prof Heshie, amazon.com