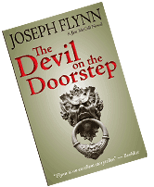 Patricia Darden Grant, President of the United States of America, placed her left hand on the Bible held by her husband, James J. McGill, and raised her right hand. Chief Justice Craig MacLaren also raised his right hand and intoned the first words of the presidential oath of office. The president began to repeat the oath as an estimated eight hundred thousand of her fellow Americans standing on the National Mall beyond the Reflecting Pool, looked on, many of them booing and jeering.

More than another hundred million Americans were watching on domestic television. That number was exceeded by those around the world viewing the event on international broadcasts and streaming Internet feeds. The president, sparing one glance at McGill, looked at no one except the chief justice.

She said, “I, Patricia Darden Grant, do solemnly swear …”

Suburban Virginia
Minutes earlier, three miles south of the Capitol, two hands opened an upstairs window at the rear of an expensive but unremarkable tract house. A buzzing sound began and a UAV — unmanned aerial vehicle — flew out of the house and into the overcast sky. The device had the wingspan of a red-tailed hawk. The finish of the UAV was a mottled blue-gray. It all but disappeared against the backdrop of the sky. The soft buzz of its propeller was inaudible at a distance of a hundred feet.

The tiny aircraft banked to the north at near-rooftop level and set a course for the U.S. Capitol.

Suburban Maryland
The location of the Multi-Agency Communications Center was secret. The men and women who worked at MACC were responsible for the safety of everyone attending the presidential inauguration, first and foremost the president and her husband. The pecking order of the lives to be preserved, after those of the First Couple and the vice president, was also kept confidential.

The foursome in charge of coordinating the protective efforts consisted of: Major General Amos Stokes, Commander of the Military District of Washington; David Nathan, Director of the Secret Service; Byron DeWitt, Deputy Director of the FBI; Cathryn Gorman, Chief of the Metropolitan Police Department.

The three men at the top of the food chain fastened their eyes on the monitor showing the president taking her oath of office for the second time in two days. The official oath had been sworn yesterday in the White House on January 20th as prescribed by the Constitution. The public ceremony was just for show.

Chief Gorman was the one who noticed the skirmish start on the fringes of the huge crowd. Thousands of people who thought Patricia Darden Grant had stolen the election were no longer content to shout their objections. They pushed forward in the direction of the Capitol as if they hoped to prevent the public swearing in.

The police and the military had been warned of such a possibility. They stood at the ready to restrain such a charge. Only the protestors didn’t reach the lines of uniformed resistance. Other members of the crowd, partisans of the president, pushed back against the protestors, keeping them on the far side of the Reflecting Pool. Within seconds, blood was being spilled as the largest brawl in the nation’s history began.

Men, women and even adolescents threw punches, kicked one another and wrestled each other to the ground. In places where one combatant was clearly getting the better of another, he or she was quickly swarmed under by a group of the opposition. A terrible cacophony — shrieks of panic, curses and battle-cries — filled the air.

Chief Gorman yelled to her people on the scene, “Go, go, go!”

Secret Service Director Nathan told SAC Elspeth Kendry, standing near the president, “Be ready. Get Holly G. and Holmes out of there on my word.”

He wondered if the melee might be a diversion.

He looked from one monitor to another to see what might be coming next.