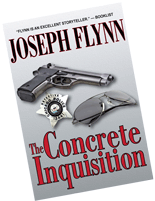 Michael “Doc” Kildare, former undercover narc, sues the government. Claims one-third of the $45 million recovered in the drug raid he led. Armando Guzman, the drug lord who lost the money, doesn’t like that. He puts out a contract on Doc’s life. Doc’s former boss, the superintendent of the Chicago Police Department, also takes exception. He says the confiscated drug money is his. So when he learns of Guzman’s contract, he quietly passes the word: Nobody wearing a CPD star is to help Doc in any way.

But that’s not all. An old friend of Doc’s asks a favor. Help find her son. The boy is 17 years old, but mentally handicapped. Doc investigates and soon learns there might be a serial killer working his neighborhood. Oh, yeah. Doc’s ex-wife? She’s back. He tells himself that she’s only after the millions that might be coming his way. Thing is, he doesn’t know if that’s a good enough reason to turn her away.

Hitmen to the right, a maniac to the left, and a redheaded distraction. Nobody ever said retirement would be easy.

“This is one of my favorite Joseph Flynn books. I loved all of these characters …It will keep you up reading late at night.” — Anne Dougherty, amazon.com

“J. Flynn is always a good read. I would recommend all his books.” — Troy Rogers, amazon.com