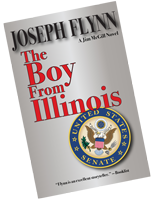 In its wisdom, the Constitution mandated that politicians who’d been returned to office needed to reaffirm their fealty to the laws of the land with each term they served. Having done so once was not enough.

Honored guests, usually immediate family members, were afforded the privilege of standing in the well of the appropriate chamber of Congress to witness the new or renewed member of the country’s legislative branch voice his or her true allegiance to the United States’ foundational body of laws.

On certain occasions, other individuals besides family were allowed to draw near and observe the sacred ceremony take place. When it came time for Andrew Baxter Lincoln, the new junior senator from Illinois and the youngest person in the nation’s history to raise his hand and take the oath of office — having turned 30 years of age, the minimum for holders of that office, just three hours before the ceremony — there were two non-family members in observance.

They were former President Patricia Grant McGill and her henchman husband James J. McGill. Patti, just like the soon-to-be senator’s parents, had to dab tears of joy from her eyes. McGill only gave the kid a grin, a wink, and an upraised thumb.

The young man caught McGill’s silent wishes for the best out of the corner of his eye and smiled. The slight diversion didn’t keep young Senator Lincoln from completing his oath of office with the words,” … so help me God.”

With the business at hand completed, the man who’d administered the oath, Vice-President Dick Bergen, himself a former senator from the Prairie State, shook the young man’s hand and expressed his best wishes for success. Then the senator’s mother, father, and Patti all embraced him.

He whispered into Patti’s ear, “I couldn’t have won without your help. Thank you for everything.”

She replied softly, “I still remember the impression you made on Andy and me when you were eight years old. I’d walk on burning coals for you.”

The senator added softly, “In exactly the right shoes, I’m sure.”

Patti laughed, and with a winning politician’s instinct the young man moved on to shake McGill’s hand. “I’m so glad you could make it, Jim.”

He grinned and said, “Since none of my kids is getting married today, my calendar was open.”

The new senator laughed. “Let me know when any of them does. I’ll read the occasion into the Congressional Record.”

McGill put both of his hands on the young man’s shoulders. The kid had political instincts like he’d never seen in anyone so young. It didn’t hurt that he was Hollywood handsome, too. That and the way he had his hair cut in a fashion that reminded many people of JFK. If things went well, he’d be sitting in the Oval Office one day.

Not that anyone could do that without some regrets.

Just ask newly re-elected President Jean Morrissey. She’d felt she had to serve a second term given the cluck the opposition party had nominated for the highest office in the land. Jean’s husband, former FBI Deputy Director Byron DeWitt, had to clench his teeth before going along with her decision to run for re-election.

At least that was what Patti had told McGill she’d heard from Jean.

McGill had replied that Byron could talk to him if he needed any peer counseling.

Before McGill could muse too long on that subject, young Senator Lincoln returned his embrace and asked, “May I have a word in private, Jim?”

McGill caught Patti’s eye. She read her husband’s expression perfectly and knew her job was to keep Mom and Dad occupied, i.e. distracted. In return, she flashed a semaphore message to him by blinking her eyes twice.

Two minutes at the most, and you tell me everything.

McGill nodded and let the new lawmaker take him only ten feet distant. Patti would use her personal magnetism to keep the senior Lincolns occupied, but Vice President Bergen, not yet occupied with the next swearing-in, was looking directly McGill’s way.

The Veep kept a poker face, but McGill knew he was a sharp guy.

Probably had excellent hearing, too.

“Whatever you have to say, Senator,” McGill told the young man, “keep your voice down if you want to keep things confidential. Not that I won’t share everything you tell me with Patti. You understand that, don’t you?”

After a heartbeat’s hesitation, Senator Lincoln said, “I do. I didn’t think of it until you brought it up, but I should have.”

“So, what’s on your mind, Senator Lincoln?”

“Your company does personal protection, I understand.”

McGill nodded. “Deke Ky, a former special agent with the Secret Service, manages that end of things for us.”

“Good. I’m glad to hear someone who knows the ins-and-outs of the job is available. He is, isn’t he?”

McGill nodded. “Who’re you thinking of? Your parents or a girlfriend I haven’t heard about?”

The young man laughed softly. “I wish I had time for a girlfriend.”

His thoughts seemed to wander for a moment, McGill saw. Maybe the kid had just realized he’d better be happily married for a few years before he ran for president. Maybe even have a toddler to complete the happy family picture. The public had already shown it was open-minded enough to elect two women as presidents. But a male bachelor? That might be a bridge too far.

“Senator,” McGill said quietly, snapping the young man out of his reverie.

McGill nodded. “Good thing. From what I’ve seen, having any important job in this town takes a lot of focus.”

“So why are you asking about personal protection? Please tell me someone hasn’t threatened you already.”

“No, not yet,” the senator told McGill, “but I feel it’s just a matter of time.”