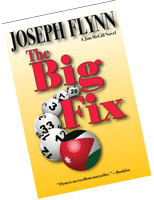 Jim McGill and Margaret “Sweetie” Sweeney sat in the main conference room of their detective agency’s headquarters building. McGill occupied the seat at the head of the table; Sweetie sat to his right. All the other chairs at the table were vacant at the moment. McGill had offered Sweetie the opportunity to take the top spot any time she wanted it, whether it was just the two of them in the room or the whole gang was there.

The only times Sweetie had accepted McGill’s offer of taking the pride of place at the table was whenever there was a question of personal or professional conduct to discuss. She was the company’s chief ethics officer. The Washington Post had heard of her job and asked Sweetie to do an interview on the subject of moral business conduct for its Labor Day 2018 edition. Her initial impulse had been to deny the request.

“Who am I to preach to anybody?” she’d asked McGill.

“Sure, but that’s just to a gaggle of gumshoes who sometimes need to be reminded of their manners and to make sure we don’t have to settle a suit or put up bail money for an employee. Either of those things might embarrass both of us.”

McGill had grinned. “You know better than most that I don’t embarrass easily.”

Besides having McGill’s blessing on doing the Post interview, Sweetie’s husband, Putnam Shady, and their daughter, Maxi, had urged her to share her thoughts on the subject with the public. Maxi had clinched the matter when she’d said, “Mama, you might make someone’s life better.”

Putnam had put the cherry on top. “Maybe even several someones.”

To show that no good deed went unpunished, Sweetie’s ideas on ethical business conduct had been a hit with the newspaper’s readers, several of whom worked in television and wanted Sweetie to appear on their shows. Neither Putnam nor Maxi could persuade her to do that. McGill knew better than to even try.

The matter facing the two managing partners that morning, however, had nothing to do with honest business behavior. Their focus was monetary, i.e. was the company keeping its head above water? The answer to that was almost an embarrassment for both of them.

McGill grinned at Sweetie and said, “It’s not quite like we can print our own money, but it’s not far from that either. Unless we’re interrupted by the Second Coming, this should be the eighth straight quarter with a double-digit increase in both revenue and profit over the previous quarter.”

“Crime pays, huh?” Sweetie asked, uneasy about becoming affluent in her own right.

There had once been a time when she’d taken a vow of poverty.

McGill said, “I can’t speak for the criminal element, but putting things right for people who’ve been wronged seems to be a paying proposition.”

“People who can afford us,” Sweetie replied.

“We’re still taking pro bono cases. That number has gone up, too. It’s right there on the spreadsheet with all the others, if you want to take a look.”

McGill asked Sweetie a question that had never even occurred to him before. “You have the blues about something, Margaret?”

Without being specific, he’d just asked if everything was all right at home.

“He used to be more than a little bit of a rascal,” McGill said, “until someone came along and showed him the light, the truth, and the way.”

“Yeah, that was me, spoilsport that I am. There are actually times when I miss some of his old mischief. He’s improved himself so much that sometimes I think I’ve gone too far.”

McGill said, “I could give him a good talking-to about all his high-gloss rectitude, but how far should I go?”

Sweetie smiled. “Tell him wearing a leather motorcycle jacket would be okay, but nothing with chains.”

“I know it’ll be years before she goes off to college, but I’m dreading it already.”

“All I can say to that is if I have grandchildren by then, I’ll put your name in to babysit.”

Sweetie’s expression became so sad McGill feared her eyes might fill with tears, showing him a side of her he’d never seen before. But Esme Thrice saved the day by buzzing them.

“Boss, Marvin Meeker and Michael Walker are downstairs with Dikki. They don’t have an appointment, but they’d like to have a word with you if you have the time.”

Former Metro PD detectives Marvin Meeker and Big Mike Walker, aka Beemer, had retired from the police department not long ago and had opened their own, much smaller, private investigations firm.

“Is Rockelle Bullard with them?” McGill asked.

Out of the corner of an eye, McGill saw that Sweetie was paying close attention, her unusual moodiness gone for the moment. Rockelle Bullard had been a Metro PD captain and Meeker and Beemer’s boss. She’d hoped to go on to become the chief of police. When that hadn’t happened, she’d upped the ante and her energy and won the mayor’s office.

After a moment’s silence, Esme came back and said, “Sorry, Boss, it’s just the detectives, no mayor. They say they’ve come to see if you’d like to collaborate on a case with them.”

McGill heard Beemer’s voice through the intercom. “We can pay you, too.”

Meeker added, “Just not as much as you’re used to.”

McGill grinned and looked at Sweetie. “Come on up, guys. We’ll see what kind of bargain you can drive with Ms. Sweeney.”

While they waited, Sweetie told McGill, “You handle the financial stuff around here.”

“Except for how much the firm donates to charity,” McGill reminded her.

“Yeah. Even so, if there’s any bargaining to do with Meeker and Beemer, you handle it.”

“Okay. I do need your opinion, though, about opening new offices in Europe. Did you get a chance to read the analyses Patti’s guy did for us?”

When McGill Investigations needed business expertise beyond the means of its in-house staff, McGill turned to his wife’s venture capital firm, Committed Capital, for help. He paid the going rate, of course.

Sweetie said, “I did my best not to let my eyes glaze over.”

“London looks like a good business proposition. I think we should wait on Berlin. The money in Germany would be good, but the politics there look a little touchy.”

McGill nodded. “I feel the same way. Be a helluva thing if Europe went crazy all over again in the early years of another century.”

Before that dark possibility could be discussed, Esme buzzed them again.

“Mr. Meeker and Mr. Walker are here,” she said.

“Please show them in, Esme,” McGill said. “Did you ask if they need refreshments?”

“Maybe some champagne later,” McGill heard Meeker say. “You know, if we all wrap up this case.”

Esme opened the conference room door so the conversation could continue face to face.

“Gives you an idea of why we came knockin’,” Meeker added.