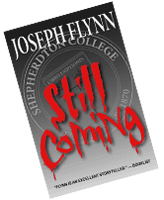 Every year the best colleges reject thousands of the brightest young minds in the country. But what might happen if a large number of them refused to take no for an answer?

Nerves fray, and if the “comers” aren’t trouble enough, a Peeping Tom turns into a home invader, and shows signs of becoming a full-blown sexual predator. The town fragments and people take up arms after one last message is received…

Still Coming is a psychological thriller for anyone, student or parent, who’s ever sweated a college admission decision.

“Revenge can be sweet. I loved this book.” — Sherry, amazon.com

“Another great who done it by Joseph Flynn.” — KenDen, amazon.com

Still Coming Expanded Edition
The expanded edition of Still Coming includes not only a psychological thriller but also a look behind the curtain of how it was written. The 106-day literary process of writing the novel is described in the included blog Committing Fiction. Also included are comprehensive biographies of the major characters and a partial story outline. For new writers learning their craft and curious readers wanting to see how a story comes into being, this is the opportunity to match the work of writing with the result.