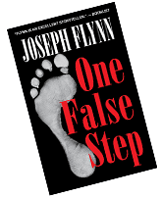 The way Catholics did things when somebody died, the body was left on view at the wake, but the casket was closed for the funeral Mass. Ansel Williams’ remains, however, looking as good as if he’d just closed his latest big real estate deal, were left on display at the Agnus Dei Church right through the last note of “I Shall See My God,” which brought the service to a close. The irregularity was a small concession to the widow in light of her fifty thousand dollar donation to the parish school’s tuition assistance fund.

Alexandra Williams, young, exotically blonde, and the picture of heartbroken beauty, stepped from her front row pew and approached her late husband’s casket. Every eye in the congregation was on her, none more closely than those of the two homicide detectives, both dressed in black, the female with a large brimmed hat, standing at the back of the church. They had an unobstructed view up the central aisle, got to see the widow and her lost love positioned just so in front of the altar and the stained glass window of the Savior.

“Bitch is milking this for all it’s worth,” Detective Bibi Ferrer whispered to her partner.

Bibi was Cuban-American, thirty-five, with chestnut brown hair, caramel skin, and whipcord muscle tone. Passionate about any injustice, she was having trouble holding her temper as she watched a killer stand over her victim, using the church as a stage set to aid in her pretense of anguish.

“Watch for the tear,” Detective Brady Teague answered softly, just a touch of Irish in his voice. “If she’s artful, it’ll be only the one.”

Brady’s hair was silver and cut short. He was slender with world-weary eyes and a rueful smile. He had the elegance of Fred Astaire in his later years. He’d also put away more killers than any other cop in the history of the San Diego Police Department.

On the verge of retirement, he didn’t have to be at the church that morning, but he had sensed Bibi might need his presence to keep from doing something impulsive. That was, something that could damage either her career or an eventual case against Widow Williams.

The two detectives watched as Alexandra gracefully lowered her head. Most everyone in the church would later say that she was kissing her husband goodbye, but curtains of shining pale hair kept any kiss from actually being seen.

Leaving room for Bibi to say, “She’s telling him, ‘Thanks for the money, sucker.’”

As if hearing her cue, Alexandra straightened. But she went Brady’s scenario one better. She placed a red rose on her late husband’s suit coat — and then a single tear fell on the flower. Reflecting light like a drop of blood.

The older detective was still taken by the woman’s stagecraft. The flower, the tear, the timing: it had been brilliant. Anyone who didn’t know better would have been taken in completely.

He looked at Bibi and said, “I’ll be available to consult. Assuming my last thing doesn’t come before yours.”

Each detective put on a pair of sunglasses and slipped outside.

Alexandra Williams had left her late husband, the casket now closed, and was heading for the door. The two detectives didn’t want her to get too close a look at them.

From the curb outside the church, Bibi and Teague watched Alexandra’s limousine pull away, taking note of its direction.

“She’s not going to the cemetery,” Bibi said.

Teague nodded. “The airport would be my guess. No time wasted.”

“Out of the country.”

“Someplace warm, welcoming, and protective of its rich.”

“The rich,” Bibi said. “With the seven hundred and fifty million dollars she took from Ansel Williams, she qualifies for that.”

“I won’t follow her wherever the hell she goes,” Bibi said.