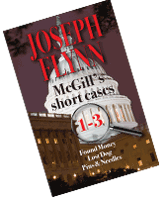 As a cop and later a private investigator, Jim McGill has worked some really big cases. Life and death cases. One case, solving the murder of Patricia Darden Grant’s first husband, might even have changed the course of American history. But not every investigation is epic in scope. There are short cases, too.

This is the first collection of three such cases. In Found Money, political enemies of the president — McGill’s wife — try to concoct a scandal by making McGill look corrupt. If McGill is going to stop them, he’ll have to turn things around overnight. In Lost Dog, a little girl wants McGill to find her missing pooch. Only the kid is the daughter of a Russian diplomat, and the Chinese might be involved, too. If McGill isn’t careful, he might step in something nasty. In Pins & Needles, McGill is asked to help a first-round NFL draft choice who put himself on the wrong side of voodoo queen. To come out on top in this one, he’ll have to steal the woman’s juju.

“I love the characters Mr. Flynn has put into his novels. I even forgive him for leaning far to the left in his last full novel about Jim McGill. Only kidding. I have given every one of his books 5 stars. Enjoy!” — S. Ort, amazon.com