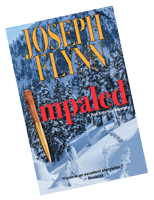 In the multi-color glow of the family Christmas tree, Mayor Ron Ketchum changed the post-dinner diaper of his six-month-old son on the kitchen table. He had just fastened the second tab when the phone rang. Caller ID showed Clay Steadman’s name. Ron told little Mathew, “Boss is calling, Matt.”

Technically, that was no longer true. After Ron’s election and swearing in as mayor thirteen months earlier, he worked for the people of Goldstrike. Even so, Clay had brought him to the Sierra Nevada resort town to be the chief of police; he’d engineered Ron’s rise to mayor, too. After the transfer of municipal power from the film icon to the cop, Ron had told Clay, “You’re leaving big shoes to fill. I’m going to call on you when I need advice.”

“I picked you for the job,” Clay said, “because I figured you could do it on your own.”

“Sure, I can. I was just thinking of the style points. Like how to get people to tremble at my approach but still adore me.”

Clay told him, “First, you become the biggest movie star in the world and then an auteur the critics don’t dare second-guess. Failing that, you’re out of luck.”

Ron said, “I’m going to need something new to call you, too, since I’m the mayor now and you’re not.”

“You can call me Mr. Steadman, sir. Just like everyone else.”

“Not Sir Clay? You know, anticipating your eventual honorary knighthood.”

The look Clay gave Ron had made many a movie villain regret his career choice.

“Maybe I’ll just call you boss in honor of the old days.”

Clay Steadman’s willingness to give Ron a second chance had changed his life for the better in every way he could imagine.

“That’s a step in the right direction,” Clay allowed.

So “boss” it was when Ron answered the call.

“Can you stop by the house?” Clay asked.

To Ron’s ear, the request sounded like a deathbed whisper.

“Sure, right away. Keely’s out of town. Is it all right if I bring Matt?”

“Yeah, why not? Put a hand over the kid’s eyes, if the sight of me frightens him.”

Ron laughed, but he kept the idea in mind. “You’re not about to die, are you?”

Clay was the one who coughed up a laugh this time. “What I’ve got can’t be fixed. Just come by. I have a few favors I need to ask before I go.”

The former mayor-for-life hung up, ruling out further debate.

Keely Powell, Ron Ketchum’s wife and consulting detective to the Goldstrike Police Department, was completing the sale of her house in L.A. The paperwork at the Realtor’s office was staggering, form after form, each of them requiring one or more copies of her signature. Made her feel like she was back in elementary school, having to write five hundred times on the blackboard, “I will not sass Sister Paula in class.”

She’d been in the fifth grade for that ordeal. Had to perform her punishment in front of thirty-one classmates for a dose of humiliation, and to be an object lesson to the other kids. Keely had been just ten percent of the way through the grind when her music training kicked in; she’d been taking piano lessons for five years. Mom thought she might be a prodigy.

Not even close, Keely knew, but she wasn’t half bad.

She’d picked up notation easily and had an intuitive understanding of melody.

As a lyric, she recognized “I will not sass Sister Paula in class” had a certain lilt to it.

So while the nun was busy at her desk grading papers Keely started to compose a tune, adding musical notes above each of the punishment words. Kids who’d been falling asleep in their seats suddenly took notice. Most of them couldn’t read music, but some understood what was happening. Covert messages were passed.

Soon, the whole class was grinning.

Jerry Kirkman, who was a bit of a musical prodigy, quietly started to hum the melody he saw taking shape in front of him. Keely gave him a wink. Sister Paula heard Jerry but, bless her, liked the tune and felt Jerry’s volume was not disruptive. She kept her focus on her grade book.

Breaking from the prescribed language of her punishment because good lyrics had to go somewhere, Keely started to improvise new wording, and when she concluded with “… or she’ll kick my ass,” the whole class erupted in laughter.

Sister Paula finally looked up and saw what was happening. She was not amused. She ordered that the offensive phrase be erased immediately. Jerry Kirkman volunteered for the job, and as Keely was being dragged off to the principal’s office he copied down her composition, adding a few flourishes of his own.

After Keely’s parents arrived at the school, it was decided by all concerned that Keely would be better off in a secular school. Nonetheless, her song lived on at St. Mary’s for years.

As pleasant as that reminiscence was for Keely, it didn’t last long enough.

A new stack of documents needing signatures was plopped down in front of her.

Keely flexed her tired fingers and got back to the grind. She was tempted to sign the papers with the names of famous women she admired: Amelia Earhart, Eleanor Roosevelt, Rosa Parks. But she didn’t want to screw up a deal that was going to add $1.1 million to her investment account. So she dutifully scrawled her own name, each iteration growing more illegible.

To distract herself further, she thought of Ron and Matt. That she’d become a wife and mother in less than a year, after she’d pretty much given up on becoming either of those things, still seemed like a dream to her. The fact that she was head over heels in love with both her big guy and her little guy made it all the more incredible.

Of course, nothing less would have persuaded her to sell her home in L.A. and move to a small town in the Sierra. She had extracted from Ron the promise that as soon as Matt left home for school outside Goldstrike the two of them would spend their winters in Santa Barbara — Montecito, if they had the money for it by then. He’d agreed and Keely had kissed her boys goodbye to fly to Los Angeles and finalize the sale of her house.

Now, she couldn’t wait to get back to them.

And with one last document signed and dated she was free to do just that.

She shook hands with the couple who’d bought the house, wished them well and headed straight for LAX to catch her flight back to Reno. Only RNO, Reno-Tahoe International, had been closed by the imminent arrival of bad weather. A blizzard that had been due to hit after midnight — when she would have been snug at home — was moving in early.

While she’d been stuck shuffling paper.

She couldn’t help but wonder if somewhere Sister Paula was laughing.

Keely decided she would have the last laugh. She saw that flights were still landing in San Francisco. She spun her tale of woe to a ticket agent at Southwest, herself a recent mother, and got on board a flight leaving for San Francisco within the hour.

She sat back and did her best to relax on the seventy-five minute flight. When she landed, she’d have to rent an all-wheel-drive vehicle and slog four, five or six hours to Goldstrike, depending on traffic, road conditions and visibility. The length of time didn’t matter, though.

She wasn’t going to let any freaking blizzard stop her from getting home.