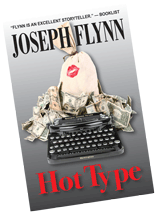 Ben Hecht wanted his typewriter back. Or so his lawyers said.

Dan Cameron took one look at the registered letter that arrived at his Evanston, Illinois home and replied, “Too fucking bad. It’s mine now.”

The typewriter in question was a mint-condition 1938 Remington Noiseless Portable in Glossy Black. Dan loved it. Loved it from the first second he saw the sleek little Art Deco machine. After he used it to write his bestselling first novel, Indecision Kills, he became even more attached to it. He wasn’t giving it back.

Not without a helluva fight.

Not at all, before he got a second novel out of it.

Dan’s wife, Erin, had given him the Remington for his fortieth birthday. She hoped it would get Dan out of his rut. That was, she wanted him to be more than the beat reporter for the Chicago Tribune he’d been for the past seventeen years. She’d wanted him to write the novel he’d been talking about ever since they’d met. Though he hadn’t talked about it much lately.

Dan had once saved Erin’s life, kept her from plunging into the cone of a Hawaiian volcano. But in the past few years — three at least — Erin felt that some — a lot — of the magic had gone out of their marriage.

She thought if Dan finally became a novelist, got famous, and dedicated his undying love to her in every book he wrote, that might be a good start in getting things back on track.

Okay, he didn’t have to dedicate every book to her. In fact, she’d be happy if he wrote only one novel. Just so long as he followed through on the ambition he’d talked about for years. Didn’t simply settle into middle age on the treadmill of pension plans, retirement, and pre-paid cemetery plots.

Erin was having Dan’s mid-life crisis for him.

She was five years younger than her husband and an admitted excitement junkie, in recovery for more than a decade. But now she felt the old pressures building. Pretty soon she and Dan would have to make some big changes in their lives — or she was going to need a fix. It’d be back to the bad old days: she might find herself on the crumbling lip of Mount Haleakala once again.

She didn’t think that would help her marriage at all, so she had to give Dan a nudge — a shove — to finally write his novel.

She hadn’t been looking for a typewriter that day she’d been browsing eBay. She’d been open to any literary icon that would turn the trick. The auction site had a surprising number of possibilities: a dressing gown worn by Oscar Wilde, a pipe smoked by Ernest Hemingway, even a Smith & Wesson .38 Police Special (sans firing-pin as eBay didn’t trade in firearms) said to have belonged to Mickey Spillane.

It was the said to about Spillane’s gun that gave Erin pause. How could she know if any of this stuff was genuine? Oscar Wilde’s dressing gown? Hemingway’s pipe?

“Gimme a break,” Erin muttered at her computer.

Then she saw Ben Hecht’s typewriter.

The one Hecht had used in 1946 to write Notorious, supposedly. Erin remembered seeing the movie back in her college days. Hitchcock had directed. Cary Grant and Ingrid Bergman had starred. The story had spies, Nazis in Brazil, and one of the hottest kisses in cinematic history.

Whew. Thinking about that kiss still got her going.

If that wasn’t enough, the biographical note on Hecht mentioned that he’d received an Oscar nomination for his script, had once been the most famous newspaperman in Chicago, and had been the co-author, with Charles MacArthur, of The Front Page.

Jeez, could she find a better gift for Dan?

Had to be too good to be true.

But who cared? The machine looked so cool that even if it hadn’t been used to writeNotorious, it should have been. Erin snapped it up for $500. A bargain.

But what was really great was the way she gave it to Dan.

There’d been the obligatory party for family and friends with much kidding about Dan’s advancing age. Was his dark hair showing some gray? Were those baby-blue peepers starting to squint a bit myopically? Was he still able to keep his beautiful blonde wife happy?

Respectively, the answers were: No gray hair yet. The eyes still worked fine except in dim restaurant light, and yes, he still kept Erin satisfied, if not with quite the same frequency.

Erin shooed everyone out by ten p.m., which only brought on more jests about old guys needing their rest. Dan rolled with it. He was by nature easy going, comfortable with who he was. He stood alongside his wife at the kitchen sink and dried the dishes she washed.

When the last one was done, he asked, “There a reason you wanted me to yourself so early?” He waggled his eyebrows at his wife. Tonight, he was interested.

Erin took his hands, gave him a big wet kiss, and said, “I thought we’d watch a movie. I got a classic from the video store this afternoon.”

Not exactly what he’d expected, but snuggling on the couch with your honey could lead to other things, especially if …

They did it right there on the couch … on the coffee table … and on the floor. Then with the furniture askew and clothes flung to the four corners of the room, they lay looking at the ceiling, panting, holding hands.

“That was amazing,” Erin murmured.

“Yeah … and the sex wasn’t bad either,” Dan said. It was a joke, but Erin immediately got up and Dan thought he’d offended her. “Honey, I was just—”

She shushed him, but with a smile. “Wait, I’ll be right back.”

Erin returned, still naked, and by the light of the TV screen Dan saw she was holding this cool little old-timey typewriter between her breasts and her bush. Great presentation.

“For me?” She’d told him his surprise birthday present was back-ordered.

Erin nodded. She said, “This is the typewriter used to write the movie we just saw.”

Dan asked, “That scene where Grant and Bergman …”

Erin nodded again. “It used to belong to Ben Hecht. Now, it belongs to you. I thought you might like to use it to write your novel.”

She handed the typewriter to her husband. They both laughed when Dan got a new erection the moment it was in his grasp. This led to a running joke that every time Dan touched the Remington he got hard; and every time he saw Erin naked he felt compelled to write. But over the course of the following year he was productive in both areas.

Erin got all the excitement she needed and Dan wrote his novel.

And they bought their own copy of Notorious.