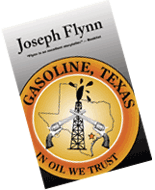 Chapter 1
There hadn’t been any gunfire by eight p.m. on Election Day, but that was about to change if Buckminster Musgrove had his way.

Buck was the campaign manager for Laddy Johnson, and he had blood in his eye as he asked to hear one more time the report his son, Ben, had just brought in.

Ben was perfectly willing to repeat himself in the exact same tone of outrage he’d used to announce his news moments earlier. “The goddamn 11th precinct polling place is still open and letting people vote, an hour after the law said it had to close. When I went over to say, ‘What the hell do y’all think you’re doing?’ two of Win-Win’s boys pointed scatterguns at me. Shit, if I hadn’t been alone …”

Ladbrook “Laddy” Johnson and Edwin “Win-Win” Winslow were competing for the office of mayor in the town of Gasoline, Texas, a gathering of 20,000 souls at the southernmost point of a ragged triangle with Houston to the northeast and Austin to the northwest.

Win-Win was the incumbent; Laddy the challenger.

Even by Texas standards the race had been spirited.

Meaning it was a surprise blood hadn’t been spilled already.

“You did the right thing, Ben, not getting shot,” Laddy said, sitting behind his desk, his feet up, not looking the least perturbed at hearing the election might be stolen right under his nose. “No sense in anyone getting killed.”

A point with which Ben’s father begged to differ.

“Fuck that shit, Laddy,” he said. “Bastards think they can steal this election and threaten my boy’s life, I’ll waste every last one a them. Tie Win-Win to a tree and skin him alive.”

Hardly the usual strategy for a Democrat. On the other hand, Buckminster Musgrove was a former Marine and handy with both a gun and a knife.

“Buck,” Laddy said calmly, “as much as we like to romanticize the Wild West hereabouts, none of us would actually care to live in the 19th century. What we’ll do is send Ben back to the 11th precinct. Have him take Mary Sue Parker from the Beacon with him.”

Mary Sue was the reporter covering the Johnson campaign for the town paper. She’d compromised her journalistic objectivity by sleeping with Ben Musgrove on the second night of her assignment. She’d also promised Laddy good press if he got her résumé to the executive producer of Entertainment Tonight, whom Laddy had met exactly one time for three minutes.

The candidate continued, “Let’s get Ben up on the roof of … what’s that building across the street from the 11th precinct polling place? Is it still a jewelry store?”

“Fein’s,” Buck nodded, restraining himself until he saw where Laddy was heading.

Contrary to his candidate’s assertion, Buck would have been perfectly happy giving up his modern creature comforts if he could more often settle matters with his own two hands. Only thing he couldn’t do without was Friday night football. No real Texan could live without that.

“Ben,” Laddy said, “you get up on top of Fein’s with a videocam. One that has a date and time stamp in the frame. Shoot any illegal voting going on. Shoot Mary Sue asking the boys with the shotguns if maybe they’re allowing only Win-Win’s voters in; keeping everybody else out at gunpoint. Make sure Mary Sue’s discreetly miked so she can record whatever they have to say.”

“Win-Win’s the biggest advertiser on KYHA.” YEEHA-TV, channel 85, was the Fox affiliate in town. The only station with a local newsroom. “They ain’t gonna air anything we bring in, no matter how damning it is.”

“We’ll get the Houston and Austin stations,” Laddy said. “They’ll go with it. CNN’ll pick it up. People in Gasoline will get the news.”

The notion sounded like Castro jamming TV Marti to Laddy. Cold War paranoia. He was tempted to laugh. But he’d been back in Texas only a little over a year, returning from 15 years of living in L.A. Maybe interfering with federally regulated broadcast signals wasn’t as outlandish as he thought.

He shrugged. “Be that as it may. This campaign will not initiate any gunfire.”

But he turned to his son and said, “Go on, boy. Get Mary Sue and do like you were told.”

For his part, Ben looked relieved. Eager, even, to be pulling a scam with Mary Sue instead of charging into battle with his father and a posse from Johnson headquarters.

Buck closed the door to Laddy’s office, just the two of them in the small space now.

“You’re gonna hate yourself if you lose ‘cause a this,” Buck said.

“Not nearly as much as if you or Ben or someone else got killed.”

“I promised my mother I’d do my best,” Laddy told him.