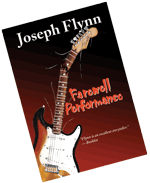 They met at the Rose Café in Venice, two cops trying to look like civilians, not quite pulling it off. That was the impression they got anyway, the way other diners strolling out onto the restaurant’s patio kept their distance. Had to be some subtle suggestion of covert authority and concealed weapons. Otherwise, two good-looking people like them, they’d be jostling for elbow room.

Joan Duarte’s sable hair fell to her shoulders and framed an oval face that Modigliani would have loved to paint. She would turn 40 in two months, but her trim figure clad in jeans, a pink polo shirt and an unstructured pearl white linen jacket said she was ten years younger. Rick Valkonen was obviously older, mid-50s, but he was no less striking than his companion. Tall and lean with a craggy face, he had sapphire blue eyes and wavy hair that intertwined threads of gold and silver. His jeans were faded and topped by a new baggy black sweatshirt, bereft of designer logo, university affiliation, or lowbrow witticism.

Detective Duarte was with the Santa Monica Police Department; Sergeant Valkonen was LAPD. Even sitting at the café table after introducing themselves, they gave off the feeling of two dogs circling one another, unsure of which one would lunge first.

Maybe that was what kept people away.

Duarte took a sip of her Arrowhead sparkling water and said, “My boss said to tell you our department will be happy to cooperate with LAPD in any way it can.”

Valkonen grinned. He rolled his coffee cup back and forth between his hands.

“Let me be honest with you, Detective. I got assigned to this job because I’m on my boss’s shit-list. And you’ve been told who my boss is, right?”

“Yeah. So pardon me if I’m wrong, but if I got stuck with this thing for screwing up, I have to wonder why you’re here this morning.”

Duarte looked at the cup of coffee Valkonen was still playing with. Black coffee, as simple as you could make it. But what she noticed most was his hands. They were big and strong, nails closely trimmed. Made her think that lean or not this guy had some good muscle under that loose shirt of his. Made her wonder, too, what kind of sidearm he carried under there.

She looked up at him and said, “You tell me your screw-up, I’ll tell you mine.”

“Fair enough,” he said. He took a sip of his coffee and put the cup down, off to one side. “I proved to be a lousy babysitter.”

Duarte looked at him like he was jerking her around, but he held his hands up to placate her.

“God’s truth. My final assignment before I retire after 30 years of service was to babysit the chief’s son, keep him out of trouble here in temptation city.”

“Your chief has twins, right? Didn’t I read that in the paper?”

“Boy and a girl, 16. Normally, I watch Justin and Sergeant Mary Pat Keegan watches Justine. But this past weekend, Justin comes down with the sniffles and he’s in bed for the weekend. I think, great, time off for me. But Keegan wants to go to San Francisco for her favorite niece’s wedding, begs me to watch Justine, swears she’ll make it up to me.” Valkonen shook his head. “Like a sucker, I say okay.”

“Well, with Justin, if need be, I can go into the men’s room with him. With Justine, I have to trust she won’t get in trouble making wee-wee all on her own.”

“No. The little princess was slicker than that. She had some kid waiting in the john for her. Slipped her a new jacket, a hat, a different pair of sunglasses. When she came out with her hair tucked up under the hat and the new shades, I didn’t recognize her. My bad. I should have picked up on her fat backside, except I try not to notice those things on girls that young.”

“Good for you, Sergeant.”

“Yeah. Anyway, she gets away clean. I finally show my badge to a lady who’s about to use the facilities and ask if she’ll see if there’s a young girl named Justine in there. She comes out about ten seconds later with the clothes the kid was wearing and a note that was with them, says: Ha-ha. Real charmer, that kid.”

“She didn’t get hurt when she was out on her own, did she?” Duarte asked.

“In retaliation. He swung at me first.”

“Why’d he do that?” Valkonen asked.

“The guy had been sexually harassing me for months.”

They both knew this was a sensitive decision. A female cop who filed such a complaint always found it hard to get any male cop to work with her again. They were afraid she might falsely accuse them of the same thing.

Then again, there were cops who felt the only reason to have a female partner was if she was putting out for you.

So there was justifiable heat in Duarte’s voice when she said, “Damn right, I did.”

“And I couldn’t prove it. Bastard was always real sneaky about it. He’d come up behind me and whisper filthy things in my ear. Not loud enough for anyone else to hear.”

“He ever touch you inappropriately?”

The detective’s jaw tightened and she nodded.

“And nobody saw that?”

“Not that they’d be willing to say officially.”

“So what happened? You got this guy to lash out at you?” he asked.

“My lawyer gave me the idea. She said give him some of his own medicine, demean him when I thought the time was right. Opportunity came during a shift change; I was heading out, into the parking lot, he was heading into the station. He gave me this big smile because he’d just been cleared of the charges I’d filed against him. I noticed right then he and I were the only cops present who spoke Spanish. So I said a few things. Nasty, terrible things. But in this sugar-sweet voice like I’d just come from charm school.”

Duarte smiled at the memory.

“That’s when he tried to hit you,” Valkonen said.

“He ran at me swinging. Bastard punches like a pansy. I punch like my dad, and he was a Golden Gloves champ. Blackened the creep’s eye and knocked him on his ass with one shot. But that wasn’t the worst thing.”

“He wet himself. Sat there in his own stink. Nobody wanted to help him up. It became a he said/she said thing since nobody but us understood what I’d said. We both got conduct-unbecoming flags in our personnel files and we were suspended without pay for a week.”

“You didn’t fight that?”

“I’d already given my lawyer enough money. I thought about quitting but I’ve got 17 years in. I want my pension. I came back to work this morning and they told me go see this cop from LAPD. So here I am. What’d Justine do after she got away from you?”

“She ran into this kid in Santa Monica who told her about a free concert that’s supposed to happen soon.”

“Well, the thing is, the band is supposed to kill themselves — onstage.”

“Yeah, and when the music stops, everybody in the audience is supposed to commit suicide, too. And they’re expecting a crowd of maybe a thousand kids.”

“Well, Detective, that’s what you and I have to find out.”