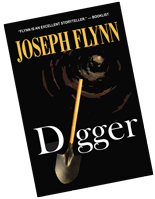 Once in a lifetime, a man may find himself in a desperate battle for everything he holds dear.

Twenty-five years ago John Fortunato was a soldier in Vietnam, fighting in the crushing darkness of the tunnels of Cu Chi, from which the Vietcong launched their deadliest operations. When he got back to his hometown of Elk River, Illinois, he secretly re-created those hellish tunnels. Partly a memorial, partly a kind of exorcism, they now lie hidden beneath the town’s peaceful streets. John traded his M-16 rifle for a Nikon camera and built a career as a successful photographer. He thought he had put the war and the bloodshed behind him, but a powerful new enemy has other plans for John Fortunato.

On a quiet April night, Fortunato witnesses the brutal sidewalk shooting of an innocent man. The vicious crime is but the first assault in a struggle that will erupt into a full-scale battle for control of Elk river, a struggle that will divide neighbors and tear families apart.

In this powerful, explosive, utterly unforgettable thriller, that all-out war has come twice for John Fortunato. Once for his country—and now to save his hometown and the woman he loves.