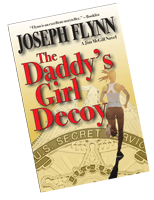 “Mr. Flynn please write faster and never give up on this series. — John J. Giere, amazon.com