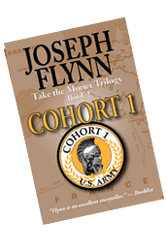 Cohort 1 was nominally attached to the Seventh United States Army. It had been known as the Armored Corps, under the leadership of Lieutenant General George S. Patton, when it first took the fight to the Germans in Morocco in 1942. A year later, as it was en route to the invasion of Sicily, the Armored Corps was re-designated the Seventh Army. After the Seventh captured Palermo and Messina, it was tasked with the invasion of southern France. The plan was to assault the Mediterranean Coast of that country in the coming summer of 1944. Its objective would then be to drive the German army east out of France and into the Fatherland itself. That would be where the fight to win the war in Europe would end. Along the road to achieving its goals, the 7th Army was absorbed into the newly created 6th U.S. Army Group.

The names kept changing with one exception: Cohort 1.

Major Kinney led his men off the beach as soon as they’d climbed out of the boats. They triple-timed it to a stand of trees a half-mile inland. The land ahead rose steadily, becoming tall hills or small mountains. To the east were the Maritime Alps. To the northwest was the Rhone River Valley. Due west were the cities of Toulon and Marseille. In any direction they went was enemy-occupied territory.

Upon reaching the grove of trees, Major Kinney gave the men of Cohort 1 a minute to collect themselves. The short run hadn’t winded them. The men were all too fit for that. Dealing with the adrenaline rush of entering enemy-held territory was another matter. There was no way to avoid that. Everyone needed a moment to settle his nerves and gather his wits.

That was assuming they didn’t come under immediate enemy fire.

They didn’t, and Major Kinney set their next goal, moving farther inland, at which point they would disperse and head for the separate target areas they’d been given. That assumed the intelligence briefings they’d been given about enemy troop positions were accurate or nearly so.

If that information proved to be outdated, then the men of Cohort 1 were to look for the targets of the greatest opportunity, i.e., killing any available enemy officers whose loss would do the most significant damage to the Germans’ war-fighting ability. In deference to earlier discussions among the members of Cohort 1, savvy-looking sergeants were also to be considered worthwhile targets.

The plan had it that the target radius of one team would not overlap that of another. If a situation did lead to more than one team firing upon a single enemy position, the man in each team with the superior marksmanship skill would decide whether to continue the multiple points of attack. In any case, though, no team was to openly endanger itself.

Their job was to hit and run and live to fight another day.

Shoot-outs at the O.K. Corral were forbidden.

As soon as the men of Cohort 1 had composed themselves, Major Kinney looked at each man. It would have been helpful to look each of them in the eyes, but the best he could manage in the relative darkness was to see the blurred outlines of their faces.

Still, he didn’t get the feeling that any of the men, officers or enlisted ranks, had lost his nerve and would be ineffective to carry out the mission they’d been given. He said in a voice just loud enough to be heard by everyone, “Form two ranks in front of me, one kneeling, one standing.”

Sergeants Weaver, Hart, Jameson, and Wolenski stood with the seven officers in the second row.

Major Kinney reminded them of the orders they’d received.

“We are to move from here to an area of woodland five miles to the northwest. We will have to cross open fields to get there, so we need to move in darkness and arrive at our place of concealment before dawn. If at all possible, we are not to engage with enemy forces or hostile paramilitary forces such as the Vichy French patrols.

“If it becomes impossible to avoid conflict, we must do our best not to leave alive any witnesses to our presence in France. We want to hunt the enemy, not have them hunt us. Is all that clear?”

“We will leave here momentarily in the two-man teams that have been previously assigned. There will be no individual riflemen until we reach our next destination. Stick with your partner. Watch out for each other. Don’t let anyone get spooked and fire a round recklessly.”

“Save the comedy for another time, too,” the major said. “I’ll be leading the way with Corporal Pittman. Ten minutes after that, Captain Stanley and Corporal Jenks will follow. We’ll all move at ten-minute intervals.”

Major Kinney outlined the rest of the sequence. Sergeant Jameson and Corporal Novak were placed in the middle of the chain. Master Sergeant Weaver and Sergeant Hart were to bring up the rear. Everyone was told to time his departure by using the pocket watches they’d all been given.

The major explained: “We’ll have our strongest shooters at both ends of the line and up the middle. Nobody really knows if that’s the best way to do this because we’re trying something new here. We’ll see how it goes and make adjustments in our next forward movement if necessary.

“Don’t leave early, and don’t be tardy,” Major Kinney added. “We want everyone to get to the next mustering point alive and well. If by some chance one team is forced to engage with the enemy, it will be up to them to survive. We are not here to fight as a unit unless we all happen to be caught in the same place at the same time. If that happens, shame on us. We are here as teams of two or individual hunters to kill as many significant German officers and NCOs as we can. Is that understood?”

A whisper of assent said it was.

The ten-minute intervals were thought to be time enough for each team to have a mile of distance between the one ahead of them and the one behind. That also assumed a steady and brisk pace. Most of the ground they would cover was level or gently sloping. Much of it was farmland. None of it was paved. That meant it would be easy to put a foot into a hole in the ground on which you were jogging. Maybe turn or even break an ankle.

If an injury occurred, no man would leave his partner behind. Even so, any pair that overtook men who’d started out ahead of a hobbled pair would stop only momentarily to provide aid and then move on. If both Master Sergeant Weaver and Sergeant Hart, the last men in line, were injured, a volunteer would be sent back to aid them.

Major Kinney asked if everyone understood. They all did.

“Very well,” the major said, “may God bless and protect us all.”

A few amens sounded in response.

As they did to Jameson’s rejoinder, “Except for the stinkin’ Krauts. They can rot in hell.”

Major Kinney chose not to object to that.

He and Corporal Pittman headed off to the next rendezvous point.

They were no sooner gone than Jameson approached Charlie. He said quietly, “I sure hope all this works out for us, but it might just be one big cluster-fuck.”

Charlie chuckled and said, “Cluster-fuck, huh? Never heard of that one before.”

Jameson said, “I just made it up. If I get out of all this with my skin intact, I’m thinking I might become a writer.”

“No, I’m not. I thought a sports-writer originally. How smart do you have to be to do that? Now, hell, I’m thinking maybe a novelist. Anybody gives me any shit, I’ll just smile and tell ‘em what an evil killer I am.”

Charlie told Jameson, “And I’ll back you up … as long as you’re buying the drinks.”

Charlie said, “I’ve got something to tell you, too.”

”Master Sergeant Weaver and I aren’t crazy about being the last ones to leave here. That means we’ve got an hour-and-a-half to wait. If a German patrol comes rolling through, we’re not only in store for a real ugly shoot-out, the Krauts will also go looking for other GIs. The way I see it, just standing here all that time is tempting fate to give us a smack on the kisser.”

“Yeah, so what other choice do you have?” Jameson asked.

“I’m thinking of taking a side-trip to that little French town we saw on the map.”

Jameson said, “And then what?”

“I’m hoping we might catch a Kraut officer with his pants down in a French lady’s boudoir. Or a bordello if the place has one of those. How would that be for a first shot?

Jameson put a hand over his mouth to muffle a laugh. “You are a real thinker, Sergeant Hart. Got to give you that.”

Charlie replied, “Well, we’ve been sent here to kill as many enemy big-shots as we can, right? So there’s no point standing around wasting time.”

Jameson said, “Maybe we both made a big mistake not letting them pair up the two of us. We’d probably both get killed if that was the case, but up ’til then, this war would be a helluva lot more interesting.”

The two men instinctively found each other’s hand and shook on that.

Then he found his way back to where Master Sergeant Weaver was waiting for him. In a quiet voice, he intuitively asked Charlie, “Change of plans?”

Charlie replied, “Being the hardest-working soldier I’ve ever met, Russ, you studied the map of where we were supposed to land, right?”

“And you saw there’s a sleepy little seaside hamlet about three kilometers due west of here, right?”

“Yeah, Village de Mer, just under two miles. Small place. Barely a bump in the road. But that was why we couldn’t land on that strip of beach.”

Charlie said, “I was thinking, why don’t you and I reconnoiter that hamlet? See if there’s any enemy presence there. This being France, there could be a quaint seaside brothel where German officers go to take the edge off.”

“You’ve got some imagination, pal.”

Charlie added, “Or you could wait here with the other men. It’s not likely the enemy will happen by in force anytime soon, but from my civilian experience, I can tell you a moving target is a lot harder to hit than a stationary one.”

Weaver sighed softly. “Well, hell, if you put it that way …”

“I do, but just remember one thing.”

“Shoot strictly according to nationality.”

“How will we know if any of the guys are German officers? They screw in uniform?”

Charlie grinned. “Nah, but the officers probably keep their Iron Crosses on.”