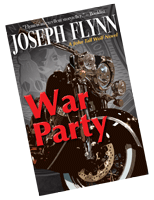 In the midst of a steamy hot start to the work week and the tail end sludge of the morning rush hour, all the traffic lights in New Orleans turned green. Every driver who was in a hurry to get somewhere, and that was pretty much all of them, suddenly had the right of way, and was aghast to find the sonsabitches on the cross streets apparently thought the same thing. It would later be said, with only slight exaggeration, that the screech of braking tires and clang of colliding cars could be heard all the way to Baton Rouge.

In short order, the howling and whining of ambulances and police patrol cars added to the ruckus. The various emergency service vehicles were not only foiled in reaching their destinations, they thickened the overheating stew of gridlock. Worsened tempers, too, with their added hubbub.

In the spirit of the moment, every driver in the city seemed to lean on his horn.

The cops, many of whom were now out of their cars, might have begun to direct traffic manually, if they hadn’t had their hands full breaking up fistfights between motorists who were as overheated as their cars. Blood flowed at several intersections. For just a moment, many combatants held their punches as a number of gunshots sounded above the general din.

Those caught in the automotive pandemonium who had any sense retreated to their cars, locked themselves in and ducked below window level. This pragmatic approach to survival only guaranteed that a resolution to the citywide impasse wouldn’t happen anytime soon.

Almost none of the people in their stiflingly hot metal cocoons noticed that aside from the traffic signals there wasn’t another light on in town. Ninety-odd percent of the city’s power grid had been taken down. An absence of electrical power in a modern city, of course, was always seen by some as a license to commit mayhem. Conditions grew worse.

Beau Duplessis, a security guard at the Thibodeaux State Bank on Rampart Street, had only to look at the mess outside the main door to know something bad was happening. Cars all jammed up, people going crazy. A retired NOPD patrol officer, he had first-hand knowledge that criminal behavior was more communicable than the Ebola virus and was often just as deadly. When the shit started to fly, the first thing you had to do was set your defenses and be ready to —

Like having a bunch of guys on black motorcycles wearing black helmets that covered their faces roar up to the front of the bank.

Pull itty-bitty machine guns out from under their black jackets.

Whip off their helmets and, good Lord, they were Indians. Faces covered with war paint. Long hair tied back. Some of them wearing eagle feathers. Beau almost soiled his britches then and there. But his training and a sense of duty kicked in.

Not that he had any intention of going for his gun. No, sir. If he started swapping shots with those guys, they’d put more holes in him than Katrina had put in the levees. He lunged at the front door. If he could lock them out, that might be all that was needed. The bank’s doors and windows were made of a polycarbonate resin. Ought to stop the slugs from small grease guns.

Beau hit the door a heartbeat before the first bad guy did. He pressed the button to shoot the bolt but it didn’t respond. He did lose a little something in his underpants right then, but he tried to throw the lock by hand. An Indian pushed back on the door, and he was bigger than Beau.

By now, the thirty-seven people in the bank, clients and staff, had caught notice of the struggle going on at the front door. Shrieks rose from several women and more than a few men. The other security guard on duty, Harold Murtree, might have rushed to Beau’s side, lent his weight to a push that would have allowed the door to be locked, and changed the whole course of the day’s events.

Only Harold was too busy pulling off his uniform cap and shirt and disposing of them in a waste paper receptacle. With only a slight hesitation, he put his gunbelt and sidearm in the bin, too. Now he was just another guy in a pair of slacks and Doctor John T-shirt. The maneuver might have been a clever ruse, have the robbers think he was just another civilian; he could go for his gun at an opportune moment.

But Harold raised his hands in an attitude of surrender. Sweat beaded on his brow. He whispered the first prayer that came to his mind.

The only other person acting in a peculiar fashion was a man in his mid-twenties. He had a gleam in his eye and looked as if he was watching the coolest TV show that had ever aired, not a crime that might take his life. He reached a hand into a pocket of his jeans and came out with something he held close against his right leg.

By then, Beau’s resistance was overcome by a second Indian pushing on the other side of the door. The robbers poured into the bank, leaving two of their number outside to guard against a threat from the street and to protect their motorcycles.

One of the robbers rewarded Beau’s attempt at heroism with a blow to the jaw from the butt of his weapon. The former cop went down in a heap. Several people moaned, anticipating that the guard would be killed for his resistance.

One of the robbers held up a sign printed in large block letters.

It said: EVERYBODY GET DOWN.

Everyone did just that.

One member of the Indians’ war party kept watch over the people now lying on the floor. Made sure they stayed put. Several of the bank customers were sobbing softly, trying to keep the volume down so they didn’t call attention to themselves. Others murmured prayers, but these were muted, too. Men in warpaint with automatic weapons inspired the urge to become invisible.

After his first visual sweep, the robber tasked with watching the bank’s cowering customers relaxed and turned his attention to the other members of his tribe to see how they were doing. He didn’t notice the young man who aimed his mobile phone at him and got busy shooting a video of the robbery.

Four Indians were cleaning out the tellers’ cages. The war party’s chief directed their movements with hand signals. The young guy with the phone captured that and the deft choreography of the men grabbing the cash. Taking chances that made him shiver, the young guy made sure he got head shots of every Indian in the bank.

Seeing the one that was supposed to be watching him start to turn his head back to where the biggest knot of customers lay, the young man pulled his phone down under his chest and lay still with his eyes squeezed shut. He started to pray, too, that he wouldn’t be shot. And neither would anyone else.

He didn’t need a bloodbath to make his movie a hit.

A moment later, his prayer for salvation seemed to be answered in the affirmative. He heard several motorcycles roar away. He opened his eyes. The robbers were gone. Everybody else was still on the floor. The young man looked at the time signature on his phone.

His video was less than two minutes long.

The robbers had done their work that quickly.

Came, stole and took off. Without saying a word.

The young man jumped to his feet. He was the next one out the door.