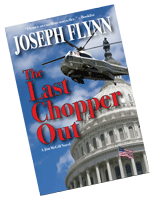 As President Patricia Grant nears the end of her second term, three big questions hang heavy in the air: Who will succeed her as the next president: her vice president, Jean Morrissey, or Senate Majority Leader Oren Worth? After a Navy warship shoots down two Chinese fighter jets, how far will hostilities with China go? And, of the utmost personal importance to Patti Grant, will her husband and henchman, Jim McGill, live to see the end of her presidency?

McGill is targeted by a cluster of killers known as los muertos, working under the direction of an enigmatic contract assassin called Taps. So McGill summons his colleagues — the private detectives who will staff his newly expanded firm, McGill Investigations International — to help keep him alive and kicking.

They’re soon put to the test when an ambush and ensuing fire-fight shatter the peace of the posh Washington neighborhood of Georgetown. Undeterred, McGill and his colleagues continue the hunt, leading to a climax that leaves McGill fighting tooth-and-nail for his life.