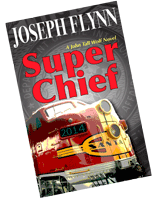 When a classic Super Chief locomotive disappears between L.A. and Chicago, and the case is handed to the BIA’s John Tall Wolf, he asks the obvious question, “How do you steal a train?” FBI Deputy Director Byron DeWitt asks the perennial question, “Are terrorists behind all this?”

Other possible suspects are Native Americans and two feuding Silicon Valley tech billionaires who were among the last people to see the Super Chief depart L.A. All trails lead to the one place John swore he’d never go: the reservation where he was born.

Looks like a good place to avoid, too, when John learns his grandmother has put out a hit on him.

“John Tall Wolf is one of my all time favorite characters, which is saying a lot since I read three to four books a week.” — N. Gargano, amazon.com

“Get the set. John Tall Wolf is a great central character. I like the Native American angle and the positive message.” — Janis Dunavant, amazon.com

“Great read. Mr. Flynn has done it again. His character, John Tall Wolf, just gets better. Plot kept me curious and unwilling to put the book aside.” — Doglady, amazon.com