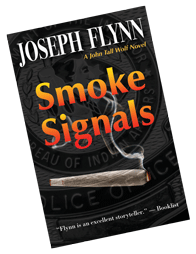 John Tall Wolf’s nemesis and sometimes boss, Marlene Flower Moon, has been nominated to become the next Secretary of the Interior. John has only himself to blame for that. He put in a good word for Marlene with his new acquaintance, the president. His thought was the new job would keep Marlene too busy to think about bothering him.

If only. Marlene immediately comes up with an assignment for John. Go to the Cascade Mountains in Washington state and see if someone has set up an illegal marijuana growing operation on land belonging to a young high-tech billionaire named Frederic Strait.

Of course, Marlene’s playing an angle. She’s seduced Strait so he’ll bankroll her ultimate political goal, the Oval Office. Marlene also intrigues John by telling him that Strait is a Native American who was adopted outside his tribe — just like John — and now calls himself Freddie Strait Arrow.

Before John can even get the investigation off the ground, his fiancée, Rebecca Bramley, arrives with the news she might lose her job with the Royal Canadian Mounted Police. Further complications include the presence of a Mexican Marine, a drug cartel boss with CIA connections, four Canadian mercenaries, Coyote herself and a grizzly bear that seems determined to eat someone.

“Wow! Flynn does it again with this fast paced thriller !” — Marie P., amazon.com

“This was another star in Joseph Flynn’s John Tall Wolf series. The Coyote, aka Marlene, is up to her tricks again and John is definitely her target!” — David Kirkey, amazon.com

“Pick up this or any other Joseph Flynn novel if you want to have a great time as a reader. My highest recommendation, one of my favorite authors altogether.” — Steve F., amazon.com